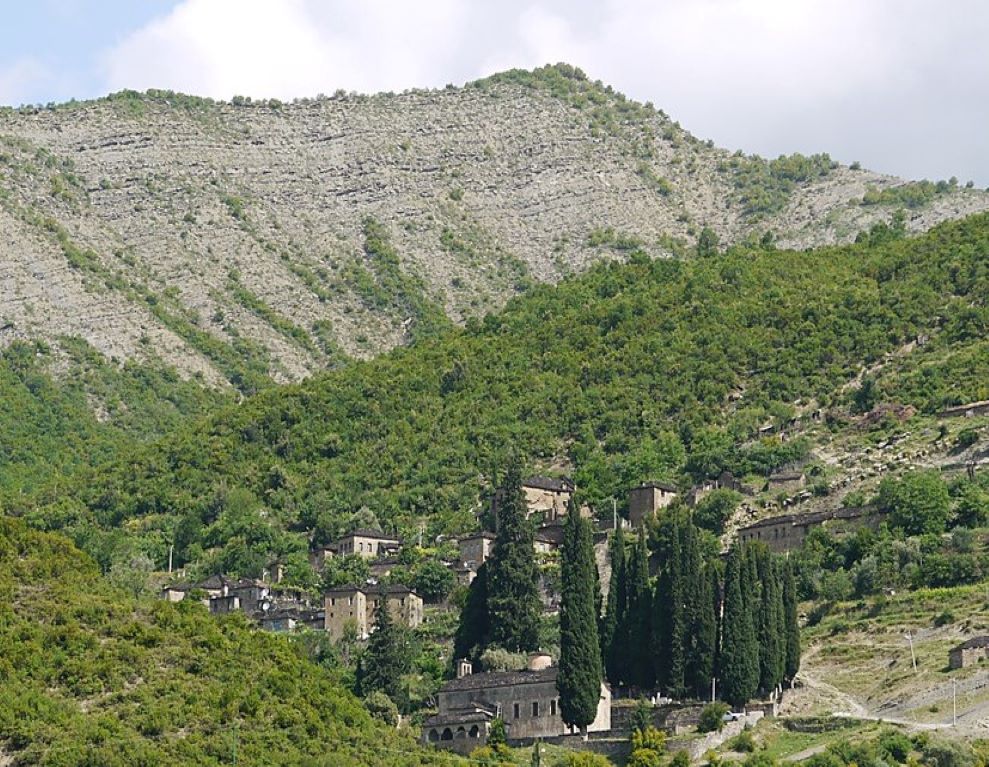 Bënjë, Përmet, (or Bënja) is a unique, small, and peculiar village in southern Albania. The village stands in a strategic elevated place that controls the gorge of the Langarica river and canyon. The few, silent houses of Bënja cut almost vertically into the mountain side upon which they stand. Their strict rectangular shapes resemble more medieval fortified towers rather than rural villas or rustic housings.

In 1970, the church of Virgin Mary in Bënjë, Përmet was declared a Monument of Cultural Legacy for its notable architectural values. Yet, the church had lost its religious function and almost all utility in 1967 due to the anti-religious dogma of the communist’s regime. The church of Virgin Mary opened for religious services in July 1991, after the fall of the communist dictatorship. However, by then it was in serious need of reconstructive works.  In 2017, the Albanian government declared the village of Bënja a “Historic Center” which meant the initiation of preservation procedures in its historic center. As part of this initiative, the Virgin Mary’s church was reconstructed and renovated.

Bënjë is located about 195 km (120 mi) away from Albania’s capital Tirana. Meanwhile, it is not far from the pristine southern town of Përmet; only some 13 km (8 mi) away. The road to the village is in a relatively good condition and accessible by all motoric vehicles.

The village of Bënjë in Përmet occupies a somewhat high ground looking over a valley of stunning beauties. Right below the village, there are the famous thermal baths of Bënja, the historic “Ura e Katiut” (“Katiut Bridge” – “Judge’s Bridge”), and the Langarica canyon. The more than 262 years old bridge is still used by the inhabitants; it also links from underneath the thermal pools with the entrance of the Langarica river’s canyon. Indeed, upon arrival in the thermal springs of Bënja you can begin exploring the majestic Langarica canyon.

The round-trip exploration of the Langarica canyon, depending on the guide and pace, lasts for about 5-6 hours. As such, bring enough food for at least one good full meal inside the deep canyon and, of course, tons of drinking water. For those loving mountain hikes, we suggest the half-an-hour walk from Bënja and up above into the village of Novoselë. Meanwhile, for the daring and professionals, the imposing high mountain of Nëmërçka (2,485 m – 8,153 ft – high above sea level) challenges anyone. This iconic peak invites the climbers into what the locals consider as “the first peak that gets lit by the morning sunlight”.

Rafting along the nearby Vjosa river, Langarica’s mainstem, is also an ideal option for outdoor sports enthusiasts. The ride lasts for about two to three hours and is moderate in difficulty. The best time to raft along the Vjosa is during March-September. Make sure to wear appropriate, waterproof clothes, and bring along changing clothes.

Only two km (1.24 mi) from the center of Bënja, one can visit the famous natural thermal pools. There are a total of six springs at the beam of some high, massive cliffs. These springs pop out on both sides of the Langarica River. These warm waters contain a high concentration of sulfur and other minerals that are considered very healthy. Thanks to such natural mineral substances, many people seeking alternative therapeutic solutions crowd this area. Four of the streams are attended, among others, by those with chronic diseases of rheumatism. Others with stomach diseases attend another stream while those with skin problems visit the last stream.

The waters of Bënja’s thermal pools have a temperature that varies from 26 to 32 °C (78.8 to 89.5 °F) at all times. That’s one of the main reasons why people flock here in all seasons. Yet, caution is advised; due to the high concentration of sulfur in the waters, you should not stay more than 20 minutes in them. Also, as soon as you come out of water, make sure to cover up with warm and dry clothing.

Bënja has a lot to offer with many unexplored pleasures still awaiting discovery. Since the hospitable town of Përmet is nearby, the accommodation is abundant providing reasonable vacancies at different standards; from camping grounds and guesthouses to hotels and resort-like structures.

The final miracle of Bënja and its region worth mentioning is its cuisine. The locals will serve you marvelous, delicious, and delicate foods. These unforgettable, traditional meals will typically include foods such as pancakes with all kinds of locally-produced jams; roasted meat; gravy on ballast; nettle soup; and radish salad.