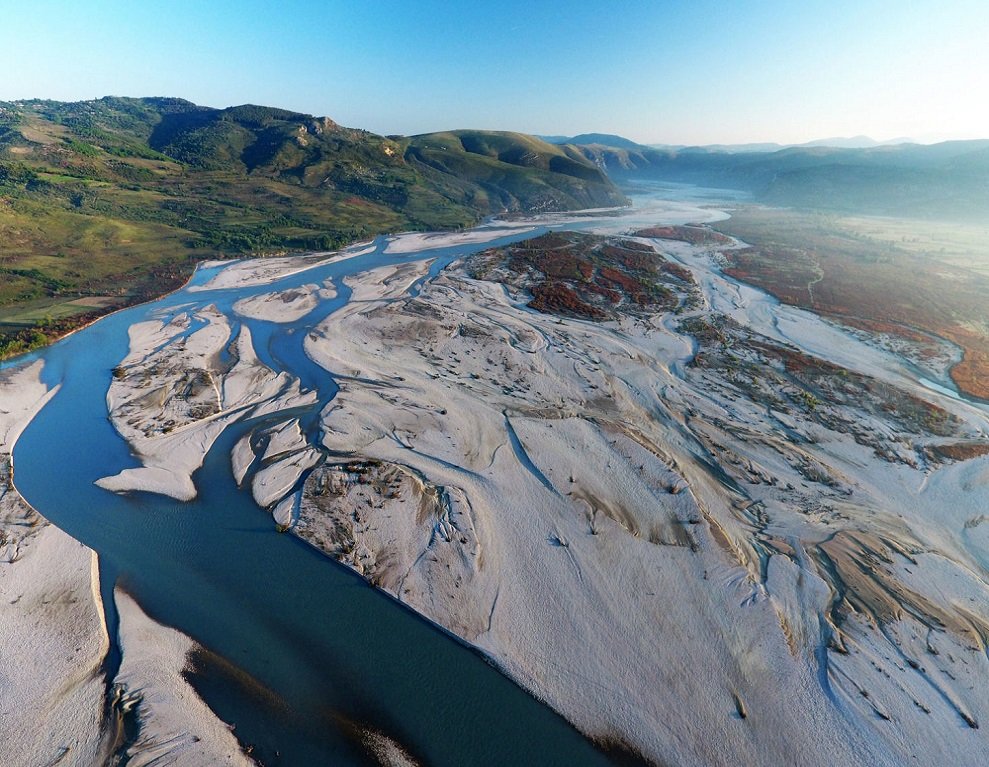 Albanian rivers are among the wildest in Europe, although they are increasingly threatened by irresponsible human activities and shady development projects. They make the Albanian Republic one of the countries with the highest freshwater volume in the continent; here are Albania’s most important fresh water highways.

Vjosa (with a total length of 272 kilometers or 169 miles) is one of Europe’s wildest free-flowing rivers. Most of its length, some 192 kilometers (119 miles), stretches along Albanian territory. However, it steams from the Greek village of Vovousa, in the mighty Pindus mountains. It flows through Konica and enters Albania near Çarshovë.

River water pass through wonderful idyllic landscapes reaching the small and sublime town of Përmet. The river giant then moves northwest cutting through the gorges of Këlcyrë and opening up majestically below Tepelenë. From here, Vjosa meanders through lowlands creating some spectacular natural scenes. These include splendid wetlands, islands caught in the current, wide-open bays, spawning fish habitats, and migratory birds’ sanctuaries.

The majestic river reached the Adriatic Sea just north of Vlora. Here it creates yet another rich ecosystem known as the Narta lagoon.

The Vjosa River is unique in the continent in that it is untamed and free-flowing. Also, almost all of its tributaries are intact from dams. The lowest part of the river especially reveal an authentic beauty. It’s where the river meanders through a complex and astonishing ecosystem.

The vast river has a crucial impact in the lives of the people along its banks. Its terraces provide many riverside villages with fertile lands for agricultural activities. In recent years, recreational tourism based on Vjosa and its tributaries has increased steadily. The sector includes activities such as rafting, kayaking, canoeing, and swimming.

Because of its unmatched natural values, Vjosa river has inspired one of the largest petitions in worldwide freshwater ecology. This petition aims to prevent the construction of any dam along this treasure.

The Drin River basin and catchment area is the electrical engine of Albania. Power plants constructed along the river are responsible for 85 percent of all hydro-power production in the country. When counting for thermal energy as well, hydro-power plants along the Drin represents 70 percent of total energy.

The Drin River is the back-bone of the extended Drin Basin. This basin connects this exceptional hydro-logical ecosystem with the wetlands of Prespa and lake Ohrid at its southernmost extreme, waters of the White Drin tributary at its northmost part, and the Shkodra lake habitat and Adriatic sea at its westernmost extreme. Before turning into the proper Drin river, it sets out from the Prespa lakes and lake Ohrid as the Black Drin River. It runs as Black Drin River for 149 kilometers (93 miles) passing through the Struga district in North Macedonia, re-entering Albania, and then meeting the White Drin branch near the town of Kukës.

The confluence of Black Drin and White Drin Rivers forms the simply called Drin River. The latter continues its journey of 106 kilometres (65 miles) west into mountainous terrains at high altitude. These altitudes vary from some 900 meters (2,953 feet) up to 2,500 meters (8,202 feet). After reaching lowlands, the Drin’s current course discharges in the Buna river. Meanwhile, an older southern channel reaches the Adriatic near the city of Lezhë.

The Black Drin – Drin river highway supports some 1,500,000 people who depend on it for various purposes. These include benefits such as drinking water, hydro-power, agriculture, fisheries, industry, and tourism services.

Devoll River begins near the village of Nikolicë on Gramoz mountain. It slowly and elegantly crosses through the fertile plains of Bilisht (or “Fusha e Devollit”), the wetlands of Small Prespa, and Korça plain where it received the Dunavec branch. After cutting the Korça plain in two, it crosses the town of Maliq where it reenters mountain gorges and plateaus of Gora and Opari. Devoll then flows lazily into the Gramsh district, takes a U-turn south and completes its journey near Ura Vajgurore where it joins Osum river with which it forms the Seman river.

The prosperous valley of Devoll has encouraged the development of small and charming settlements along it through centuries. It has resulted in a distinctive regional identity among the inhabitants. Devoll’s volume supplies two large hydro-power plants, some of the largest dams in the region.

Osum River gets its form from the many creeks that flow from Vithkuq in the Korça highlands. It gains momentum as it falls down the slopes of Gramoz in the southern district of Kolonja. The river opens up when it reaches the authentic city of Berat, contributing much to this city’s splendor and character. A little further north, near Kuç, the river joins the Devoll river thus forming the Seman River.

The main highlight of Osum are its canyons in the district of Skrapar. Tourists will witness a sensational landscape created by the Osum River some two-three million years ago. The longest uninterrupted distance into the Osum canyon runs 11 meters (36 feet) into thick high slopes, from Vau i Grepckës to the village of Blezenckë. Because of its dynamic currents and diverse rock canyons, this part of Osum River is popular for water sports such as canoeing, kayaking, and rafting.

Shala River is famous for its hazy blue colored waters, smooth side beaches, and Alpine feel. It has its source in Radohima’s peak, not far from Jezerca, right in the core of the Albanian Alps. The river has gained popularity in recent years turning into an attraction in itself. It’s no different from what you would expect in exotic Thailand worthy of memorable pictures on your phone.

Tourists can enjoy the shores and waters of this spectacular river at several beach spots alongside; Shala’s estuary in the Drin River is reachable through a ferry line that sails into the Koman Lake. Others can enjoy hiking into the surrounding mountain terrains or relaxing into the warm guesthouses in the area.

The Shkumbin River, with a drainage basin of 2,404 sq. km (928 sq. mi), runs in a direction east-west across Central Albania. It streams from Valamara mountain near Pogradec, crosses the Librazhd and Elbasan districts, and then flows into the Adriatic Sea. Despite the impact of human activity, the river still offers some picturesque sites. They include cataracts, as well as small caves and beaches in its banks.

Shkumbin’s valley has supported human civilizations and cultures for centuries. The eastern section of the famous Via Egnatia followed this river’s course. It connected the hinterland with Myzeqeja (largest plain and “granary” of Albania), ports, and seacoast. Even nowadays, Shkumbin River directly affects the lives of 500,000 people who depend on it for drinking water. Many also use its waters for irrigation purposes. Gloomily, Shkumbin is also one of the most polluted in the country. This is so mostly because of industrial dumps. As such, a cleaning and re-purposing intervention is required to preserve its ecological integrity.

Buna is one of the most lowland rivers in Albania. It arises from Lake Shkodra and soon takes on with it the waters of the Drin River. It then rushes into the northernmost coast of Albania near Velipojë where it joins the Adriatic. Most of Buna’s course serves as a border between Montenegro and Albania. This river is known for its wide and voluminous flow, with 670 cubic meter per sec (670,000 liters per sec). This ranks it third in the Mediterranean for the most freshwater discharges in its estuary. Only river Po and river Rhone surpass it in this category.

The lovely blue corridor forms a rare natural delta in its estuary. One such beauty is the Ada island (5 sq. km/53.8 sq. ft) that belongs to Montenegro. Franz Joseph, another tinier alluvial (some 0.6 sq. km/6.4 sq. ft) belongs to Albania. Most of Buna is navigable and thus ideal for sailing, kayaking, and other water sports. It seems that Buna was used by large ships since antiquity to communicate with the Lake Shkodra and its surroundings. Bilateral projects between Montenegro and Albanian could easily return Buna its former glory. It would require allowing even large boats to move up and down stream.

Drino river in south Albania is the largest tributary of Vjosa river. After steaming from northwestern Ioannina in Greece, it enters Albanian territory near the border-checkpoint of Kakavijë. Further down, the river joins Vjosa near the Albanian town of Tepelena. The river remains relatively untouched in the midst of ruins waiting to be further explored.

Drino’s valley has served as a cradle of civilization throughout centuries pointing along its course countless of precious archaeological sites. The river, steering its way past mountainous and rough terrains, has historically served as a crucial communication corridor. Travelers, merchants, pilgrims, and armies have used its corridor to move in-between southern Albania and northern Greece.

Mati river starts on the mountain called “Kaptina e Martaneshit” and reaches the Adriatic Sea after running through north-central Albania. The river has a catchment area of 2,441 sq. km (942 sq. mi). In the non-raining season, Mati reflects its blue transparent color on those who gaze at its surface. Meanwhile, in rainy periods it turns turbulent yet still staying strictly in its path. Mati’s irregular basin cuts through massive mountain gorges and fills large valleys. This results in a myriad of landscapes including green landscapes, narrows in-between giant rocks, fjords, and cascades.

The Seman river originates at the confluence of Devolli and Osumi rivers in south central Albania. This low lying river reaches the Adriatic after flowing through the plain of Myzeqeja and the rich-in-oil area of Marinëz. It’s beauty is in places harmed by irresponsible pollution and industrial dumplings. Waters of Seman provide much needed support for the agricultural production along its lower part. Recently, the coast near Seman’s estuary has revealed beautiful small and uncrowded beaches ideal for unique summer vacations.

1 thought on “Albanian Rivers: Top 10 Rivers to Spot in Albania”