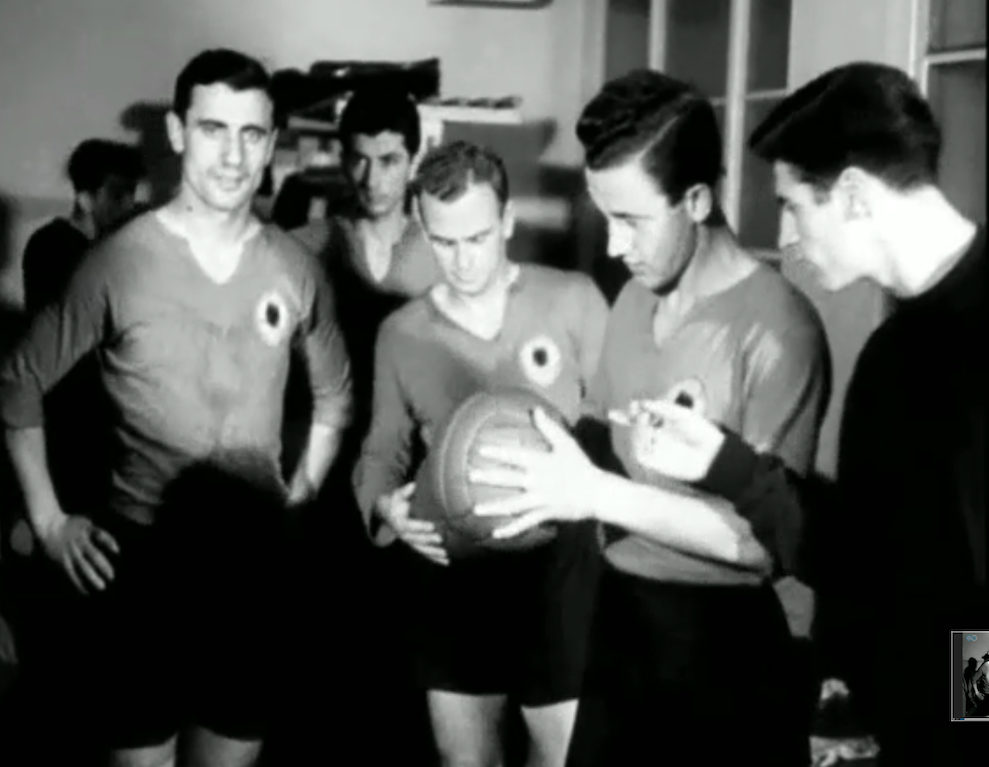 Many consider Qemal Vogli (1929-2004) the best Albanian goalkeeper ever. He was born in the small city of Kavajë, where he made his first steps in football. At 1.87 meters tall (6.1 feet), the notable goalkeeper was imposing enough to stand at the foundation of a good, solid defense. Vogli had the same age as the famous Russian goalkeeper Lev Yashin which the Albanian emulated in his playing style, namely through decisive interventions off the post and acrobatic saves over the line.

Vogli began his professional career with his hometown team of KF Besa in Kavaja. In his first official debut at the end of 1945, his side drew with Vllaznia with a clean sheet.

After two good seasons in Kavajë, Qemal Vogli moved to Durrës and joined the “SK Ylli i Kuq” team (current KF Teuta). He spent three seasons in the coastal city of Durrës; from 1947 to 1950.

In Durrës, Qemal Vogli impressed everyone with his talent and unusual maturity. He helped his team reach the third position in the hard-fought league of the 1949 season. Also, his team was competitive in the Albanian Cup in the first two editions organized after WWII. Vogli’s side reached the semifinals in two consecutive seasons (1948-1949, 1949-1950).

In 1949, Vogli joined the newly founded team of FC Dinamo Tirana. As a Dinamo player, Qemal Vogli won the domestic league title 6 times (1950, 1951, 1952, 1953, 1955, 1956). In each of these triumphal league seasons, Dinamo came up top thanks to being the best defense with the fewest goals conceded. To highlight the importance of Vogli on the back, Dinamo never came on top as the best attacking side in such triumphs.

On an individual level, Vogli registered a personal record in 1952; he played 840 consecutive minutes without conceding a goal between 21 January and 23 March.

During his short but stunning career, Qemal Vogli showcased his abilities and resilience in the best way possible. His reaction was fast, further perfected by practicing tennis and table tennis. Vogli’s air interventions in the 16-meter area prevented all dangers on the back. Due to his perfect positioning, Vogli could also make saves on the corners that would otherwise be impossible.

Vogli made his national team debut on 25 May 1947, aged 17, 7 months, and 26 days. That friendly match finished in a bitter 0-4 home loss against Romania. However, this appearance makes Qemal Vogli the youngest goalkeeper to debut for the Albanian national team. His debut in the national starting eleven came on 23 October 1949 at the away 1-1 draw against Romania. A month later (17 November 1949), the agile and confident goalkeeper helped the Albanian team register a 0-0 away draw against Bulgaria.

Vogli’s registered his best run of matches with the Albanian team during 1952-1953. With the skilled Vogli between the posts, Albania defeated the strong Czechoslovakia team twice in two weeks. The first home match played on 19 November 1952, finished 3-2. A second was played again in Albania on 7 December 1952 and won 2-1. On 29 November 1953, Albania won its third consecutive match, a rare occasion; the nation defeated the tough Poland team 2-0. Vogli’s mark and defensive leadership were evident in all three triumphs.

Like many other athletes of his time, Vogli had to play under an oppressive regime in an isolated country. He even suffered persecution from authorities, significantly curbing his career. Despite all this, Vogli managed to show his impressive and entertaining talent on the few occasions he was on the pitch.

In 1956, the Dinamo squad went on a friendly tour in East Germany. During this tour, Vogli escaped into West Germany (3 September 1956) in pursuit of a somewhat vague professional invitation but a better life and career setting. After accepting an invitation from TSV 1980 Munich, then one of the most successful German teams, the 25-year-old goalie settled in Munich. He even started training with the first squad.

Three months after joining the club in Bavaria, agents detained Vogli in peculiar conditions for breaking the border policies of the Albanian regime. After authorities brought Vogli back to Albania, they sentenced him to about 15 years in prison, of which he served almost five years. When released, the goalkeeper was only 31 and still able to play. Yet he was never allowed to play for any team. Instead, he spent his prime working as an internee and a so-called state enemy. His football career was thus interrupted permanently, leaving behind only 11 but memorable caps with Albania.

After the fall of communism, Vogli was honored with the highest presidential sports merit medals.