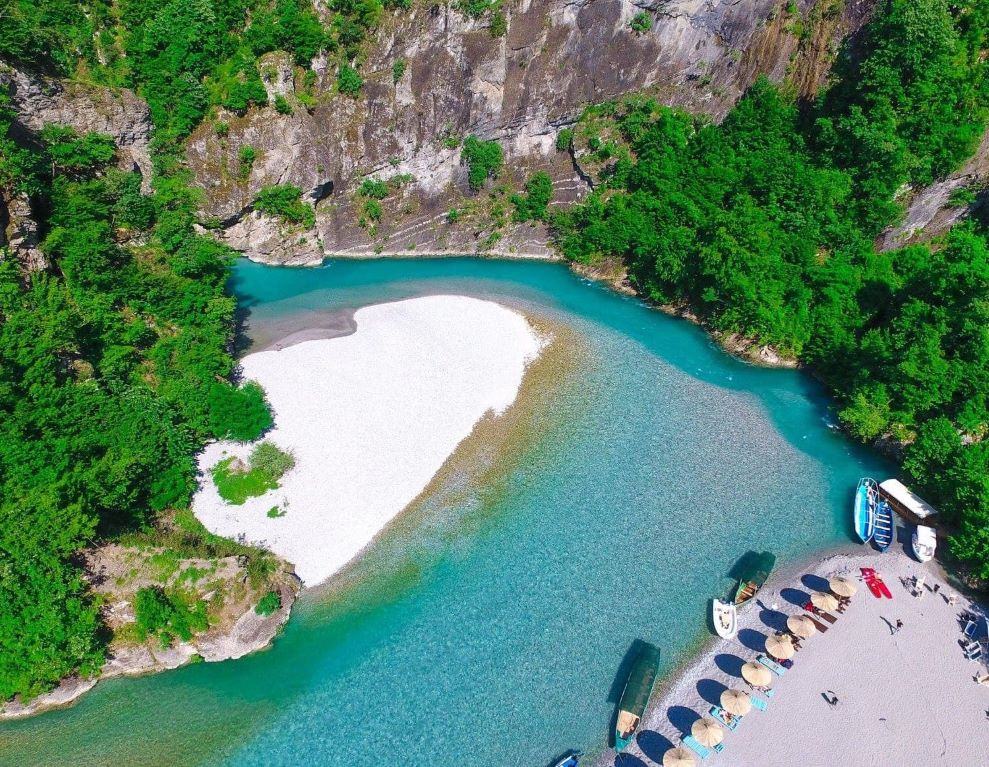 Shala River, also called Shalë, steams from the northern Albanian Alps at an altitude of 950 meters above sea level (3,120 feet above sea level). This river is 37 km (23 mi) long from its source to its outlet in the Drin River. Despite the short length, many natural beauties and attractions dot the river course.

The Course Of Shala River

The exact spot of the river source is at the creek of Shtrazës in the Okol borough of Theth village. From this place at the foot of Radohina peak, the river descends to the valley of Shala, flowing through awe-inspiring and secluded terrain. The river flows near some beautiful and small Alpine villages such as Ndërlysa, Musha, and Breg-Lumi before crossing the so-called “Porta e Shalës” (“Shala’s Gate”). This narrow gorge, called “Gryka e Rrshqëmit”, connects Shala with its lower part.

After passing Rrshqëmit Gorge, Shala continues its flow near the Lotaj village on its right and then across the valley of Shoshi. At Lesniqe, in the Temal district, Shala ends its journey and discharges in the Komani Lake or Reservoir, formed by the course of the Drin River.

A Short Profile Of Shala

Shala is a mountainous river. It drops, on average, 22 meters (72 feet) each kilometer. Shala’s basin, mostly surrounded by cliffs, totals 269 square kilometers (104 square feet). The river flows mainly southward, all the way into its mouth, at an altitude of 175 meters above sea level (574 feet).

Shala collects the waters of all the streams coming from the villages of the Shoshi and Shalla valleys. Currently, Shala is one of the cleanest rivers in the nation. The waters have a cool temperature, ideal only during summertime.

Combined with the steep rocky slopes marking its banks, the river forms a scene where the historic reality overlaps with local legends and fairytales. Among others, a tale tells that Lekë Dukagjini (1410-1481), a renowned medieval Albanian warlord, spent his last years above the secluded and protected peaks overlooking Shala’s river valley.

How To Visit River Shalë & What To Do

The easiest way to witness the beauties of Shala is by reaching its mouth in the Drin river basin. First, you need to get to the Komani Lake Ferry Terminal. Make sure to book a trip by bus and then ferry at least one day in advance. Upon reaching Komani Lake by bus, you’ll board the designated boat that will take you to Shala’s lower course. In the wetter months, boats will take you directly through Komani on the banks of Shala. However, in dry summer months, the boats cannot approach the river; you’ll have to drop off at the nearest shallow point and then walk for about 45 minutes to the banks of the Shala river.

Once you reach a lush green valley, the Shala river will reveal its beauty. The hazy and blue crystal waters of the river create one of the most fantastic beaches in Albania. Daily travelers will have 3-4 hours to enjoy the river before having to return by ferry again. Others who want to enjoy the river and its surrounding nature more can book accommodation in nearby guest houses or settle camping in adjacent parks of the area. While relaxing on the banks of Shala, visitors can engage in activities such as swimming, beach volley, photographing, diving, cave exploration, small boat rides, kayaking, and many more. Taking food, drinking water, and sweet snacks with you is essential, especially in non-summer off-season periods.