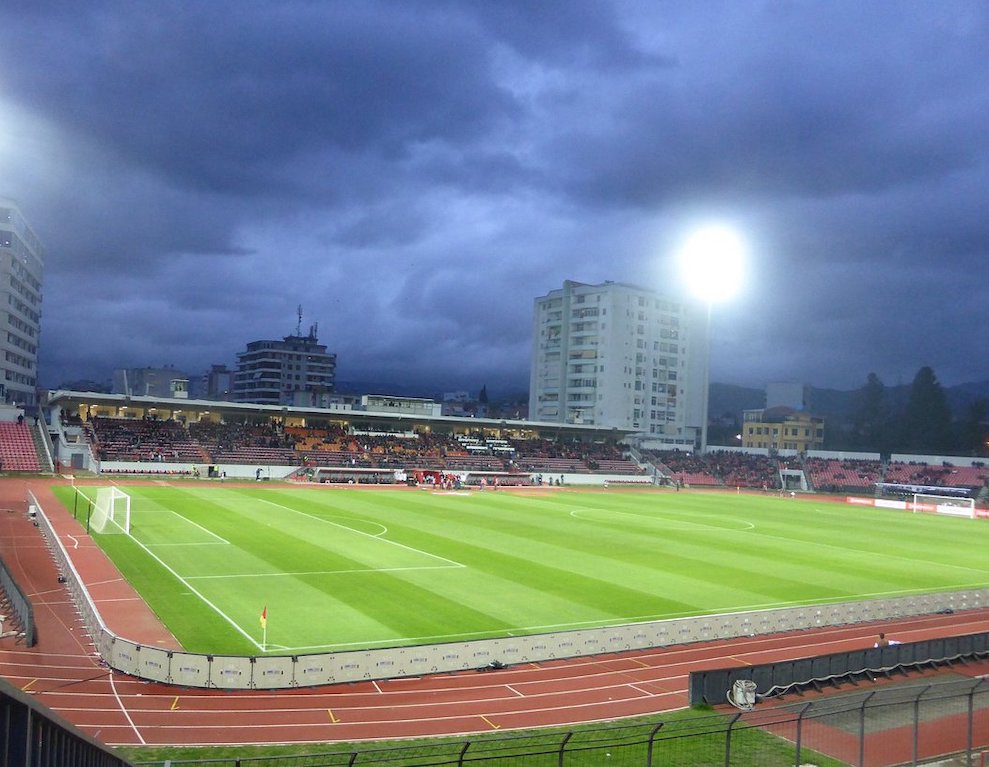 Elbasan Arena is a stadium located in the city of Elbasan. It commonly hosts football matches of the Albanian national football team and KF Elbasani (football club).

A Short Story of the Venue

Elbasan Arena, constructed in 1967, was a small, modest stadium. It was then called Ruzhdi Bizhuta in honor of one of the most notable players of KF Elbasani. Indeed, the stadium mostly hosted the home matches of the local football team, KF Elbasani.

In 2014, an investment of € 5.5 million materialized, the biggest in its history. The work began in February 2014 and concluded in October, seven months later. This intervention consisted, among others, of installing 12,500 new plastic seats (among which 400 belonged to the VIP section and 20 to the extra-VIP section). Also, it built new changing rooms, a modern conference room, an anti-doping room, a referees room, a media section with proper transmission cabins, an electronic clock behind the posts, and a new pitch surface.

The circuit embracing the pitch expanded from ten rows high to sixteen rows. Constructors also widened the emergency exit linking the playground with the outside. Specialists intervened in the existing floodlights improving lighting quality to European standards.

After the reconstruction, the main stand reached a capacity of 2,200 seats, the only seats covered in the stadium. This decreased capacity was made possible by adding five extra rows in the lower part of the existing section. Four hundred seats belong to the VIP section (with 20 in the extra-VIP area). In the meantime, journalists can use about 100 seats.

The new and modern Elbasan Arena opened officially on October 8, 2014, with a 1-1 home draw of Albania against Denmark. It had a 12,800 attendance, its record attendance ever. The draw marked the beginning of a campaign that qualified Albania for the first time in the UEFA‘s EURO competition (EURO France 2016 – Albania’s first-ever qualification into the final phase of a major tournament).

The central facade opens up to the reconceptualized public square at its entrance. This whole complex links directly and effortlessly with the city’s main boulevard. In a few years, the arena has become one of the most important landmarks of Elbasan.

With a capacity of 12,500 seats, Elbasan Arena is the third-largest stadium in the country. The venue holds a four-star UEFA rating, the highest for stadiums of this capacity. In the uncovered side stand, the colors of the plastic seats combine to form a black silhouette of a double-headed eagle, Albania’s national symbol.

Due to the favorable Mediterranean climate, the pitch consists of natural grass. As such, the field usually offers satisfactory playing conditions. Also, a superb athletic track with six lanes surrounds the grass field (which makes the stadium ideal for hosting major local athletic competitions as well).