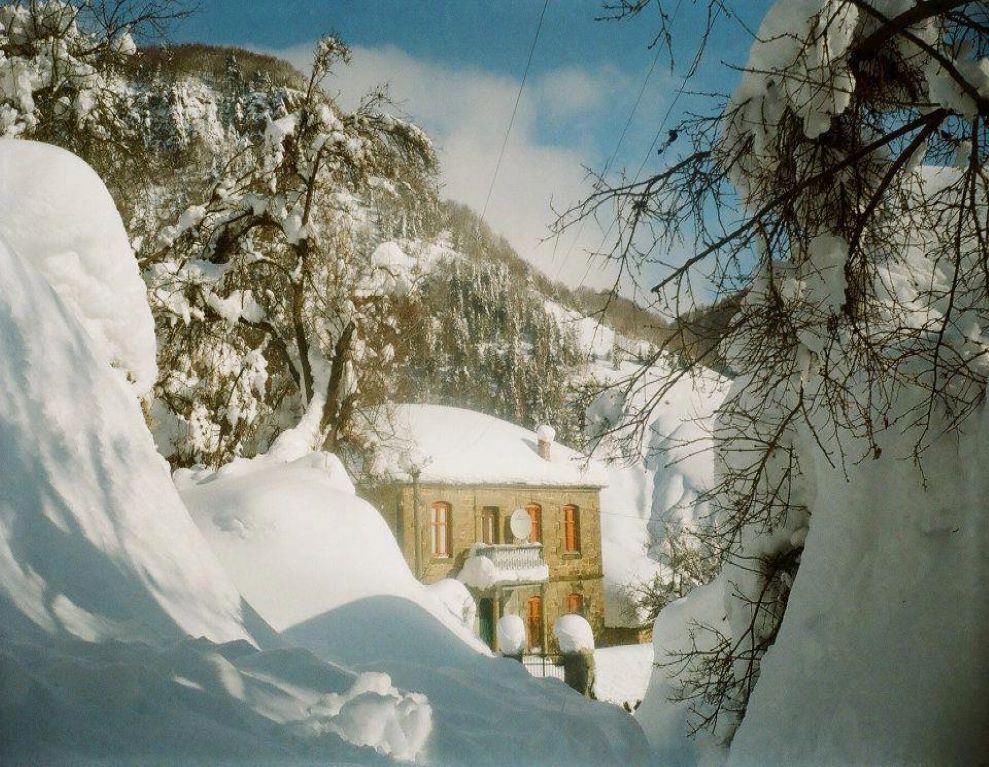 The village of Dardhë (or Dardha) sits at an impressive altitude of 1,344 meters above sea level (4,409 feet). This town stands in-between mountains filled with forests, paths, and creeks. Thus, Dardha represents an ideal winter destination. Only 19 kilometers (12 miles) from the southeastern city of Korça, Dardhë has its uncontested place in all local tourist guides.

The town of Dardha is truly an inspiring and elegant place. Each season offers a different color palette in this soft peak. Indeed, Dardha’s splendid nature and stunning views brewed generations of local painters. About 24 notable iconographic painters from Dardha emerged in-between the 18th-early 20th century. This generation of Dardharian painters began with Nikola Zengo in the second half of the 18th century and evolved with the notable Kostandin Zografi in the early 19th century. This tradition persists nowadays.

Dardharians have also contributed to the national photography archive. At least 12 notable photographers have emerged from this town, beginning with Jani Zengo decades ago and continuing with the modern Leon Çika. Visual arts are thus deeply rooted in the collective concessions of the villagers.

To get a feel of Dardha’s artistic sense, one must visit the local museum of Dardha. At this museum, visitors can observe paintings of Dardharians, authentic photographs, and ethnographic items (such as traditional clothes, all paramount to Dardha’s cultural heritage, memory, and identity). This small rural museum can surprise visitors with its rich substance and the rare specimens it contains.

A Short History Of Dardha

Dardhë village appears for the first time in a literary source related to events of 1768. Albanians persecuted by the Ottoman authorities established this town in a secluded place that guaranteed safety. In this remote adobe, they sought shelter, asylum, and, most importantly, freedom from the Turkish occupiers. Soon, the enclave developed into an autonomous, self-governed, royal tax-free town. The founders of Dardhë came from all sorts of Albanian-speaking areas: Suli (Souli), Bozdovec, Voskopoja, Linatop, Lerishtë, Qiram, and many other then-struggling Albanian towns.

The first inhabitants of Dardha soon specialized in logging and tree cutting, a profession they carried on for generations. To secure income, they often migrated seasonally to work on foreign projects. The wood-cutters from Dardhë worked on the dense Greek forests around Mount Olympus, Athos, and the seaside area of Missolonghi. Other foreign construction sites attracted Dardharians like Demir Kapija in North Macedonia; Anatolia, Turkey; Ruse and Rhodope mountains in Bulgaria and the Black-sea port of Varna.

By the early 20th century, Dardha had blossomed into a prosperous, wealthy town. In about 1913, this town had 400 houses, among which were beautiful and numerous rural villas. Four years later, in 1917, the first school in the Albanian language opened its doors in the village. Meanwhile, commerce reached a high level of development through the well-functioning of several private companies. Until the 1940s, Dardhë was the best example of a free-market local economy in Albania.

Dardhë is a Prominent Tourist Destination

The 20th century ushered in a new era for Dardharians. Seasonal migration in the Balkans turned into a permanent migration across the Atlantic Ocean; to the promised lands of America. Dardharians founded the first proper community of Albanians in the United States. The relationships with the U.S. further influenced social and industrial change in the village itself. Unlike other towns in Albania, Dardha followed an architectural style and urban organization influenced by Western trends. Indeed, the first automobile entering Albania, a U.S.-manufactured Ford, entered via Dardha.

Currently, tourism is the only economic activity present in the southeastern village. Some real estate activity has also found its way up these mountains. Visitors can thus find various accommodating options such as seasonal vacation villas, guesthouses, aged but well-preserved houses, and upcoming luxury resorts. Tourism is present all year round, with many visitors coming from outside the country. The site offers ideal conditions for practicing various winter sports, especially skiing. A proper ski slope, the best in the nation, and a whole skiing industry have developed in Dardha.

To get to the village of Dardhë, one must follow the road past Korça and the Morava mount in the Korça-Ersekë road section. Turn left at the road sign writing “Dardhë – Pikë Turistike” to reach the beautiful town. Once you arrive in Dardha, you will quickly realize why nature and its beauties stand at the core of this community. Even the name Dardhë translates as pear (a common toponym in Albania and a further testimony of the deep root in a pristine nature).

Last but not least, a visitor will enjoy the delicious and delicate dishes of the Dardharians. Some favorite recipes you must try include the so-called “lakrori me dy petë të pjekur në saç”, “petulla”, “mishi i pjekur”. One must also taste the unique conserved foods such as “pasterma” and “turshi”.