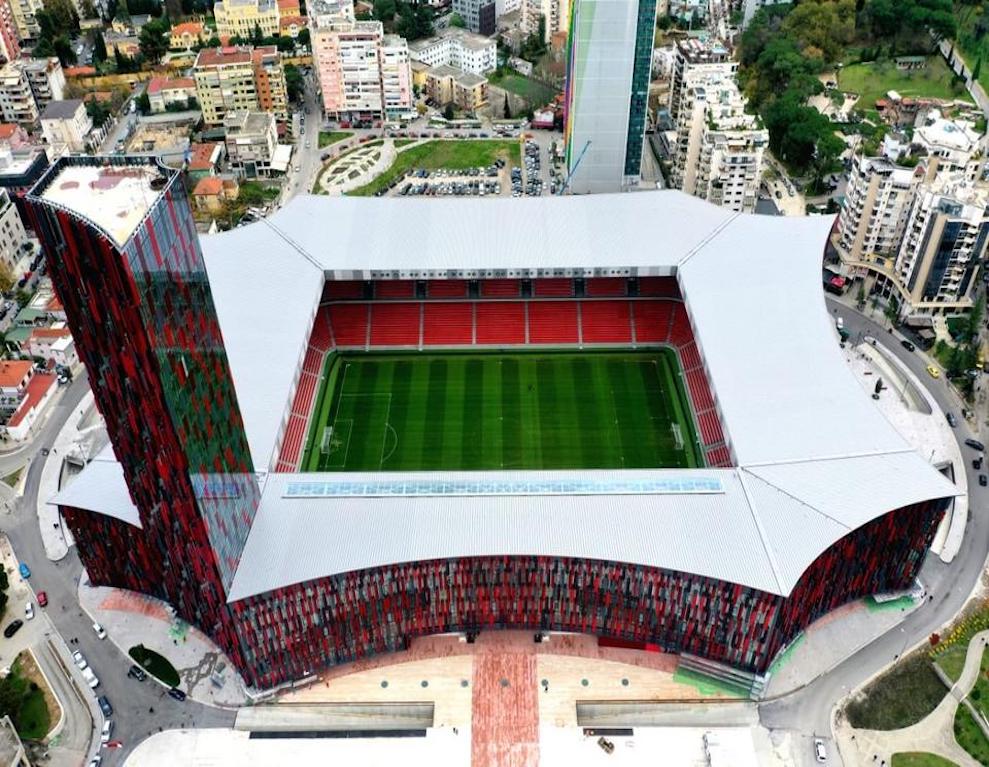 Albanian stadiums are catching up to the modern infrastructure of their European counterparts. Some of them are in the process of total reconstructions while others are being built from the ground up; here are top Albanian stadiums to attend.

Air Albania Stadium is an inner-city multipurpose venue in Tirana. It’s the largest football stadium in Albania with a capacity of 21,690 people. A high tower 111 meters high rises from the northwest corner of this ultra-modern stadium.

Air Albania Stadium was constructed over the surface where once stood the old “Qemal Stafa” stadium. Its construction spanned during the 2016 – 2019 period. A public-private partnership at a cost of some € 85,000,000 conducted the construction. It resulted in a fan-friendly venue rated with four stars by UEFA.

The arena officially opened in November Seventeen 2019 with the Albania (0-2) France match part of the UEFA Euro 2020 (postponed to 2021) qualifying round.

Elbasan Arena is the main sports venue in the city of Elbasan near the capital of Tirana. The oval-shaped stadium was first built in 1967 at the extreme of the city’s main boulevard. Currently, it’s used by the local team of KS Elbasan to play its home matches. In 2014 the stadium underwent a thorough renovation at a cost of € 5,500,000.

Because of this major intervention, the stadium adhered to international standards. It reached a 4 star UEFA stadium ranking and a total capacity of 12,800 seats. The arena opened on October 2, 2014 with the match Albania vs Denmark (1-1), valid for the Euro 2016 qualifications.

Loro Boriçi stadium was first constructed in 1950 as the home ground of KF Vllaznia (oldest Albanian club). The stadium took its current name in 1990, honoring the famous Albanian player of the 1940s and 1950s. The venue underwent a reconstruction and gained a four star UEFA stadium category in 2016. The cost of this modernization was about € 17,000,000.

Once completed, the stadium had a seated capacity of 15,919 people. This makes it the second largest-stadium in Albania. The renovated venue opened on August 2016 with the friendly match Albania (0-0) Morocco. The national football team of Kosova played here the qualifications matches for the 2018 FIFA World Cup.

Kukësi arena is located in northeast Albania, in the city of Kukësi. It hosts the home matches of the local team FK Kukësi. Construction for this stadium began in late 2019 and concluded in 2022. The cost of this investment is estimated at about € 9,000,000.

Stadiumi “Selman Stermasi” is the home-ground of the most titled football club in Albania, KF Tirana. It carries the name of one of KF Tirana’s all time best players and coaches active in the 1930s. The stadium’s capacity is at 9,500 people. The venue underwent a renovation in recent years. However, it still needs further improvements to be able to host international matches approved by UEFA. Executives from the club have promised the financing of an expansion and modernization project.

Partizani stadium is a small football venue that serves as the home-ground of the FK Partizani Tirana. This stadium is located on the outskirts of Albania’s capital Tirana. Here, it occupies once used by the Albanian Armed Forces’ institutions. It features only two main stands facing each other resulting in a capacity of about 4,000 seats. The construction cost stands at about € 5,000,000.

Stadium “Tomori” is located in the city of Berat. It mostly hosts regional football matches. It’s the home-ground of KF Tomori, the main football team in the city. The stadium’s capacity is somewhere between 12,000 and 14,500 people. Built in 1985, the stadium is famous for its elongated and covered main stand.

“Niko Dovana” stadium is located in Durrës and serves as the home-ground of the local team KS Teuta Durrës. It’s the fifth largest football stadium in Albania with a capacity of 12,040 people. It’s named after Teuta’s iconic goalkeeper and financier, active during the 1930s. In 2019, the stadiums’ facilities and pitch served humanitarian purposes after a strong earthquake hit the region in November.

Stadium “Flamurtari” is located in Vlora and is where the local football team SK Flamurtari Vlorë plays its home matches. This stadium opened in 1961 and it received several renovations during 1975, 2004, 2013, and 2014. The most recent renovation had an estimated cost of $ 150,000.

The stadium’s seated capacity is about 8,200 people. Renovation process included the construction of a new red and black facade covering the outside of the main stand.

Skënderbeu stadium belongs to the KF Skënderbeu football team representing the city of Korçë in southeast Albania. It includes very small stands, a football pitch and an athletic track. The local authorities have promised further expansion and modernization investment.